Jeremy Bentham: A forward thinker… but he lost his head! 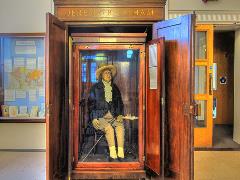 Jeremy Bentham is known as a forward-thinker, highly respected for his views on utilitarianism. He was a strong advocate for litigation funding and despised champetry and usury. Bentham’s thinking is not dead; his influence endures, as does his Auto-Icon.

Although Bentham died over 180 years ago, he still presides over the halls of the University College of London (UCL).   In his will he granted a large bequest to UCL, on the condition that his body be preserved and placed on display.  Legend has it that he even carried with him in his pocket the glass eyes which were to be placed in his mummified head.  What Bentham didn’t count on was human error. The mummification process went horribly wrong, and his head became detached from his body. In order to make the display more pleasing, a wax version of Bentham’s head was placed on his body.

In an odd gesture to abide by Bentham’s will, UCL placed Bentham’s real head at the feet of his body.  However, this proved to be too much of an easy target for University students as Bentham’s real head was stolen on multiple occasions and held for ransom.  To keep mischievous students at bay, Bentham’s badly mummified head was placed in secure storage.

The reason behind Bentham’s wish to be preserved in this manner remains a mystery.  Perhaps Bentham simply wanted to sit back and watch his ideals unfold.   Bentham may have lost his head, but his thoughts remain intact.

You may see Jeremy Bentham at the University College of London sitting in a closet the size of a telephone booth.  As a further condition to this bequest, Bentham required that he be wheeled from his booth at the occasion of every meeting of the board of trustees of the college and placed in attendance of the proceedings.